The Cherra Teachers’ Training Centre, established at Nongsawlia, Sohra is the Oldest Teachers’ Training Institution in the state of Meghalaya. Its orgin can be traced back to those days when the present North Eastern States was a part of the then East Bengal Province. 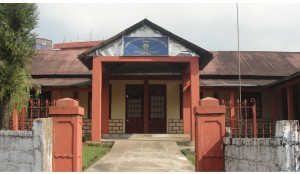 It is at Cherrapunji that the first three Lower Primary Schools were set up by Alexander Blish a young missionary sent by Rev (Dr) William Carey of the Baptist Mission, to work for the Mission during the time that Cherrapunji was the Headquarter of the British Government (1829-186q). The three L P Schools were located in three localities viz Mawsmai, Mawmluh and Sohra in the year 1832. After some years of unsuccessful efforts, the Baptist Mission discontinued its work and closed down the school in 1838.

In order that the light onpe lit up would not be extinguished from these Hills of ours, with God’s providential guidance, the Welsh Missionary Society or “The Welsh Calvinistic Methodists’ Foreign society” chose the Khasi Hills in 1838 as one of the field of the Mission Work were Rev. Thomas Jones I was the first Missionary sent by the Welsh Missionary society to come to Khasi Hills in 1840 Thomas Jones I came through Sylhet by boat, he arrived at Majai, and then climbing the hilly track passing, Shnong – Ka- War and Laittyra till he set foot at Saitsohpen (Sohra) the headquarter of the British Government on the 22nd June 1841, in the midst of a very heavy rainfall.

In 1842, Thomas Jones revived the three schools founded by Alexander B. Lish at Mawsmai, Mawmluh and Sohra In a few months he could speak and preached in Khasi. He wrote a khasi primer to use in trrese school. He translated a Book called “Mother’s gift” and “Ka kat Nongialam” and the Gospel of St. Mathew of the New Testament. Rev. Thomas Jones has been regarded till today as the father of the Khasi Alphabets and the founder of the Khasi Literature.

Rev. Williarn Lewis and his wife Mrs Mary Roberts arrived at Cherrapunji on the 2nd January 1843 and were happily received by Rev and Mrs Jones. The Mission houses at that time were in the military station at Saitsohpen For the convenience of work the missionaries requested the Raja (Syiem) of Sohra Syiemship to allot a piece of land at Nonglba (later on known as Nongsawlia) to build two mission houses, a church and a school. The request was granted by the Syiem of Sohra, U Suba Sing Syiem in 1843. Rev Thomas Jones found much relief with the coming of Rev and Mrs. William Lewis to help him. He entrusted to them to look after School works; so that he himself could devote more tirne for preaching the Gospel and translate portions of the New Testament starting with the Gospel of Mathew.

In school the Missionaries experienced problems to keep the children in the classroom Sometimes the children ran out at their will. The boys and girls found that Arithmetic was a difficult subject. They complained that the devil was the main cause making them dull to understand the numbers. The parents were against teaching the females to learn books; since the priest declared that any women who touched the book would became childless (barren). But the parents did not object if their daughter be taught only sewing and knitting. Mrs Lewis introduced this kind of learning to attract the girls to come to school, and in the mean time she would put the Reader (Primer) in front of them and told them to observe how beautiful the letters A,B, K etc. In this way Mrs. Lewis was successful in attracting the girls to come to school and gradually they could read the whole book of the First Primer.

In 1851 Rev. William Lewis opened another School at Sheila and Ka Nabon Sawian the first Christian of the females was appointed a teacher of this school. So, Nabon Sawian became the first female teacher in Khasi and Jaifitia Hills. In a period of to years the mission had opened five school, namely Mawsmai, Mawmluh, Sohra, Nongsawlia and Sheila. In 1853 two other schools had been opened at Nongkroh and Nongwar and in 1854 the first school in Jaifitia Hills opened at Jowai.

Based on the simple account of Rev. William Lewis, of his efforts to spread education among the Khasis; on the advice of Lord Dalhousie the Governor General of India; the then government of Bengal offered the Mission in 1854 a monthly grant of Rs 50 (fifty). This was the first grant – in – aid made by the Government towards education through the agency of religious organization. In 1861 the grant was enhanced from Rs 50/- to Rs 150/- pm. A few months later, the honourable Lieutenant – Governor visited the ~ills and expressed great satisfaction with what he saw of the work and influence of the Mission and hence the grant was further increased to Rs 500/- monthly.

In the year 1864, recommendation was made by the Lieutenant – Governor that the school at Nongsawlia be converted into a Normal School under the charge of a Missionary Rev Thomas Jones II for training of native teachers with a promise of financial aid by the Government Rev. Thomas Jones II worked strenuously to supply the great need. At that time Thomas Jones II had 150 boys from five different villages attended the Nongsawlia School. The first six months of the year, the boys spent in the school and for the remaining six months they were sent to teach in their villages. In this way work spread in all directions – to Mawnai in Khatsawphra, to Mustoh, Nongbah, Shangpung and Nongtalang in Jaifitia Hills, and to Nongstoifi in the west.

During the early parts of the year 1867 Rev. Hugh Robert was transferred from Sylhet to Cherrapunji and he was appointed to in-charge the Normal School as Headmaster and two master to assist him,. The salary of the Headmaster and two assistant masters was paid by the Government. The trainees were paid a stipend of Rs 4/- pm each. The course was four years. The Normal School for the girls was opened a few months later and was placed under the charge of Mrs. Roberts.

In 1946 the then Government of Assam negotiated with the Khasi- Jaintia Presbyterian Assembly to give facilities for training of deputed teachers from Government L.P.School in the Normal School attached to the Cherra Theological College. The offer was accepted and Normal School had gone by a new name, “The Cherra Teachers’ Training Centre”. Due to dearth of trained teachers in L.P. Schools, the course had been shortened to one- year. The Government recognized the Cherra Teachers’ Training Centre as a government aided institut-ion and extended a maintenance grant -in- aid of Rs 250/- pm and a rent of Rs 100/-pm. The New course had been commenced with effect from the 1 st February 1947. The Government deputed Mr. Normiwell Rynjah B.Sc, B.T. to assist Rev. E.W. Thomas (Principal, Cherra Theological College) who in charged as the Superintendent of the Cherra Teachers’ Training Centre.

In 1958 Rev.E.W.Thomas B.A, BD as the Superintendent of the Cherra Teachers’ Training Centre took special interest for development and improvement of the Cherra Teachers’ Training Centre He realized that the time had come for the native to head the educational Institution; so one of the staff members Mr. W.Knight Sohlang was deputed to Guahati University in 1959 for BT (Bachelor of Teaching) and on his return after completing the course and passed the B.T he was appointed the Superintendent of the CTTC in November 1961.

In 1978 the designation “Superintendent” was changed to “Principal” to fall in line with the designation given by the Government to the Head of the Basic Training Centre and the Normal School.

For years it has been contemplated that the Teachers’ Training Centre should have its own building (Separated from Theological College). It was in 1979 that the expectation had been materialized. The construction of the New building was constructed with government financial aid of Rs. 1,56.100/-. The building was completed in the middle of the year 1983, and the Teachers’ Training department was shifted from the Cherra Theological College in June 1983 to the present building This new school building can provide adequate facilities to the trainees and the staff members as well.

The Cherra Teachers’ Training Centre, the oldest Teachers’ Training Institute in Meghalaya has been providing good result every year ranging from 80% to 90% percentage of pass. From 1985 a New syllabus framed by the State Council of Educational Research and approved by the Director of Public Instruction, Meghalaya had been implemented.

The one year course (elementary level) had been switched over to two years duration with effect from the session 2007 -08 as per NCTE Norms and the New syllabus for the two year course was therefore adopted.

In conclusion, I feel that it is not out of place to mention the names of persons who had been serving the Cherra Teachers Training Centre in the past as full timet part time members on the staff: Rev. T.B.Phillips BA, B.D, Edn (Dip), Rev. EW. Thomas B.A, BD, Rev.Kelvinell B.A, B.D, Rev.L.S.Diengdoh, B.A, B.D., Mr.N.Rynjah B.Sc., BT, MrHoliando Lyngdoh, BA M.Ed, Ms lolindro Dkhar (normal trained) TBn. Willis Knight Sohlang (6 years as teacher- Educator and 37 years as Principal) and Mrs. Almora Lyngdoh (26years as Teacher- Educator and 12 years as Principal)

The Cherra Teachers’ Training Centre is the project of the Khasi – Jaintia Presbyterian Assembly. As the sponsoring body, the Assembly constitutes the Managing Committee through the Human Resource Department and approved by the Directorate of Educational Resear~h and Training (DERT) Government of Meghalaya.